Ken Charon has produced several extraordinary murals and is available for commissions. The one below is titled, "Ho Mai Ke Ola Hou" or "Source of Life Renew Us" and was inspired by a hike to the summit of Mauna Loa on the Big Island of Hawaii and measures 17' x 9'. It is hanging in the Malia Puka O Kalani Church chapel in Hilo, Hawaii along with other murals by the artist. 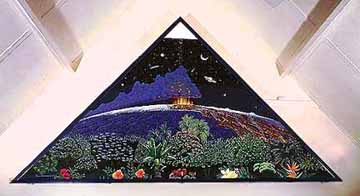 Artists Climb up to Mauna Loa

In 1989, Ken Charon captured the imagination of the Hawaii artists community by coordinating a magical expedition to the summit of Mauna Loa on the Big Island of Hawaii. He repeated the trip again in 1992 and 1993. Charon believed that the Mauna Loa summit craters and the summit environment provided a basis for significant artistic inspiration. There had not been an expedition such as this since the 1880's when Howard Hitchcock and Jules Tavenier each created paintings of eruptions on location at the summit.

Seven Big Island artists made the six day journey in 1989, and nine made the trip in 1992 and thirteen reached the summit in 1993. The location where the artists camped is at 13,250 feet above sea level. The volcano's peak is at almost 14,000 feet above sea level and is a uniquely exciting while admitedly hostile environment. Mauna Loa is the largest active volcano on earth. The series of paintings by Charon done during these treks exhibit detailed realism with an electric, hyper-intense reality

Ken Charon was one of eight American artists invited by the USSR Artists Union to participate in an international art exhibition of space art held in the Crimean city of Yalta in September of 1990. The following year the exibit travelled to Moscow. The exhibition celebrated the 30th anniversary of Yuri Gagarin's space flight.

"Ho Mai Ke Ola Hou" or "Source of Life", (shown above) was included in the book "In the Stream of Stars, The Soviet/American Space Artbook" by William K. Hartmann, Andrei Sokolov, Ron Miller and Vitaly Myagkov, published by Workman Publishing of New York in 1990

Charon's space art has earned him a membership in the International Association for Astronomical Arts and first caught the eye of Russian artists during the "Peace Art" exhibition on Kauai in 1989.

During his many years residing in France, he did work for the French National Center for Space Studies, and also won several prizes and medals in prominent art shows.